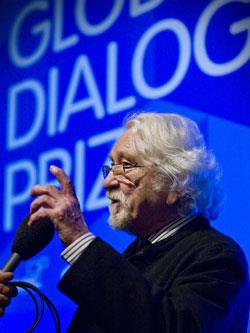 In 2009 the award committee nominated Daryush Shayegan and Mohammad Khatami as recipients of the inaugural Global Dialogue Prize for their work in developing and promoting the concept of a ‘dialogue among cultures and civilizations’ as new paradigm of cultural subjectivity and as new paradigm of international relations.

The Award Committee drew attention to the fact that the Global Dialogue Prize honors ideas and research efforts;  is not a political prize for personal lifetime achievements.

Since Mohammad Khatami was “not in the position to accept the prize”, the Global Dialogue Prize 2009 was awarded to Daryush Shayegan alone

Read the statement of the award committee.